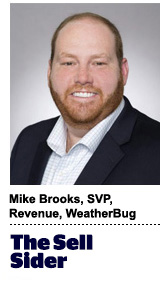 How ad technology can meet the challenge of iOS monetization

“SellerIs a column written by the seller side of the digital media community.

Recent analysis of PubMatic highlights two trends that we at WeatherBug have experienced firsthand.

First, iOS CPMs have fallen over the past two quarters, and second, the composition of global demand has shifted to Android. But why exactly is this happening, what is the impact, and what does it mean for the future?

First, the gravitational pull behind these tides is attributable to Apple’s introduction of the AppTrackingTransparency framework with the release of iOS 14.5. This framework, which was rolled out to the iOS community between April and July of this year, prohibits the use of tracking and access to IDFA without using an opt-in mechanism designed by Apple.

WeatherBug, presumably like many other publishers, suffered a loss of IDFA.

The idea of â€‹â€‹’tracking’ governs many digital bidding and monetization strategies, including retargeting, behavioral targeting, exposure capping, and attribution (the latter of which is addressed to some extent by the reintroduction of Apple’s aggregate application attribution service, SKAdNetwork).

In summary, the growth, bidding, and monetization strategies that ad technology and the publisher ecosystem have been valuing for years may be less viable in the future.

According to aggregate data from PubMatic research, CPMs increased 2.4-fold with the presence of IDFA. Think of that number now as if you are a primarily ad-supported app. Apparently half of your user base is iOS, and two-thirds of that base is losing half of their value.

Now think about what that means for the performance of buyers who place a high value on targeting and attribution. What will they do ? Spending all their money on Android?

It turns out it does.

We almost jokingly discussed this topic at Ad exchanger over a year ago, and PubMatic confirms that is exactly what is happening. A historic Apple / Android ad spend gap of 46% and 54%, respectively, has widened to a crack of 37% and 63%. Advertisers now spend almost twice as much on Android which, for the moment, remains free of opt-in or tracking bans.

This is fine for publishers in the short term, but it (a) doesn’t make up for the loss of monetization suffered today and (b) it’s a fad that I don’t think will last for long. App owners are micro-economists, and we can assume that in a world with mostly non-ad monetized apps, their average revenue per user on Android ARPU has not increased.

Spending may rush to Android, but I would say long-term microeconomics is not sustainable. I guess if there was a ROI of profitable users with existing margins on Android, the growth teams would buy them already and the app economy would normalize in the end by acquiring fewer iOS users.

So where does that leave our ecosystem of app growth and monetization? The promise of identity solutions such as UID 2.0 from The Trade Desk or ATS from LiveRamp is ideal for publishers who have email authentication, but WeatherBug, for example, is not evolving to do so today. . Still, staying connected and covered where you can will add value. The answer lies in two concepts, perhaps the only two ideas Apple’s ATT and Google’s Privacy Sandbox frameworks agree on: the importance of first-party data and on-device computing.

In Apple and Google frameworks, first party data is specifically defined as kosher. The information WeatherBug itself collects from its users can help close this monetization gap, but today it is only accessible through direct selling.

The first problem publishers would like to solve with ad technology is, how can publishers make first-party data valuable and accessible to programmatic buyers? PubMatic, Prebid Publishers Clearing House, and others have done promising early work on matching first-party data to IAB context parameters, but we need to accelerate these large-scale tests.

Second, the technology on the device is specifically mentioned in Apple and Google frameworks as meeting their terms. When hearing, attribution, or tracking decisions are made on the device and do not leave the device, the usual restrictions do not apply. Think of Google’s FLoC and FLEDGE and Apple’s SKAdNetwork as technology-wide platform versions on the device addressing specific use cases.

But the industry must also do more here. There are computational challenges in mobile which mean we have less input to make decisions, less processing power to make decisions, and less memory to store results. As an industry, we need to figure out how to balance these constraints.

Rudimentary calculations show that losing iOS CPMs will cost between $ 4 billion and $ 6 billion across the industry. PubMatic research demonstrates the pain experienced by individual apps today, but the way forward is clear.

We and publishers alike look forward to working with partners who have innovated and evolved before the whims of Apple and other tech giants. Together, we will solve the challenges we face and recoup some of this multibillion dollar hike.