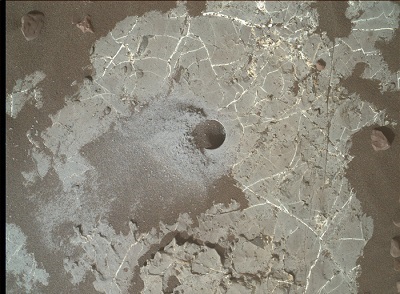 Newly discovered carbon may give clues to ancient Mars

NASA’s Curiosity rover landed on Mars on August 6, 2012, and since then it’s been scouring Gale Crater taking samples and sending the results home for researchers to interpret. Analysis of carbon isotopes in sediment samples taken from half a dozen exposed locations, including an exposed cliff, leaves researchers with three plausible explanations for the origin of the carbon: cosmic dust, ultraviolet degradation of the carbon dioxide or ultraviolet degradation of biologically produced methane.

The researchers note in Proceedings of the National Academy of Sciences that “these three scenarios are unconventional, unlike common processes on Earth.”

Carbon has two stable isotopes, 12 and 13. By looking at the amounts of each in a substance, researchers can determine the specifics of the carbon cycle that occurred, even if it happened a very long time ago. .

“The amounts of carbon-12 and carbon-13 in our solar system are the amounts that existed when the solar system was formed,” said Christopher H. House, professor of geosciences, Penn State. “Both exist in everything, but because carbon-12 reacts faster than carbon-13, examining the relative amounts of each in samples can reveal the carbon cycle.”

Curiosity, which is run by NASA’s Jet Propulsion Laboratory in Southern California, has spent the past nine years exploring an area of ​​Gale Crater that has exposed layers of ancient rock. The rover drilled on the surface of these layers and recovered samples from buried sedimentary layers. Curiosity heated the samples in the absence of oxygen to separate the chemicals. Spectrographic analysis of some of the reduced carbon produced by this pyrolysis showed a wide range of amounts of carbon-12 and carbon-13 depending on where or when the original sample formed. Some of the carbon was exceptionally carbon-13 depleted while other carbon samples were enriched.

“The extremely carbon-13-depleted samples are much like Australian samples taken from 2.7 billion-year-old sediments,” House said. “These samples were caused by biological activity when methane was consumed by ancient microbial mats, but we can’t necessarily say that about Mars because it’s a planet that may have formed from materials and processes different from Earth.”

According to House, every two hundred million years the solar system passes through a galactic molecular cloud.

“It doesn’t deposit a lot of dust,” House said. “It’s hard to see any of these deposition events in the Earth records.”

To create a layer that Curiosity could sample, the galactic dust cloud would have first lowered the temperature on a Mars that still contained water and created glaciers. The dust would have settled on top of the ice and should then remain in place once the glacier melted, leaving behind a layer of dirt that included the carbon.

So far, there is limited evidence of past glaciers at Gale Crater on Mars. According to the researchers, “this explanation is plausible, but it requires further research”.

A second possible explanation for the lower amounts of carbon-13 is the ultraviolet conversion of carbon dioxide into organic compounds like formaldehyde.

“There are articles that predict UV could cause this type of splitting,” House said. “However, we need more experimental results showing this size splitting so that we can rule out or rule out this explanation.”

The third possible method of producing carbon-13 depleted samples has a biological basis.

On Earth, a highly carbon-13 depleted signature of a paleosurface would indicate that past microbes consumed microbial-produced methane. Ancient Mars may have had large plumes of methane released from underground where methane production would have been energetically favorable. Then the released methane would either be consumed by surface microbes or react with ultraviolet light and deposit directly on the surface.

However, according to the researchers, there is currently no sedimentary evidence of surface microbes on the past landscape of Mars, and therefore the biological explanation highlighted in the paper relies on ultraviolet light to place the carbon signal. 13 on the ground.

“All three possibilities point to an unusual carbon cycle, unlike anything on Earth today,” House said. “But we need more data to determine which of these is the correct explanation. It would be nice if the rover could detect a large plume of methane and measure carbon isotopes from that, but although it There are methane plumes, most are small, and no rover has sampled one large enough for isotopes to be measured.

House also notes that the discovery of microbial mat remains or evidence of glacial deposits could also shed some light.

“We’re careful with our interpretation, which is the best way forward to study another world,” House said.

Curiosity continues to collect and analyze samples and will return to the pediment where it found some of the samples for this study in about a month.

“This research has achieved a long-standing goal for Mars exploration,” House said. “Measuring different isotopes of carbon – one of the most important geological tools – from sediments on another habitable world, and it does so by examining 9 years of exploration.”